Here’s why you should be trying this sparkling drink that is taking the world by storm.

Have you heard about Cava? Cava is a Denominación de Origen sparkling wine from Catalonia, Spain. Made from Macabeo, Parellada and Xarel·lo varietals of grapes, Cava can either be Blanco (White) or Rosado (Rosé). A Rosado is made using pinot noir, garnacha or monastrell grapes. Cava is made in a traditional method, largely in the Penedès area in Catalonia, Spain. The villages of  Aragon, Castile and León, Extremadura, La Rioja, Basque Country, Navarre and Valencia lead in the production.

Cava was initially marketed as Spanish Champagne but now can legally be only marketed as "quality sparkling wine produced in a designated region." The name Cava means Cave or Cellar in Spanish. This name helps differentiate Cava from French Champagne as caves were initially used for the production, preservation, and aging of Cava. Cava was often dismissed as cheap champagne but is soon becoming a favorite bubbly for all occasions. Cava is usually the first drink of the new year in Spain. 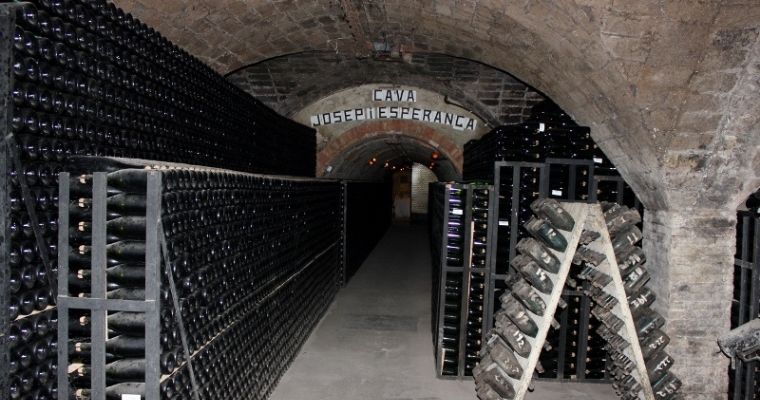 Cava being made in the depths of a Spanish cave Source: Bucketlist Journey’s Blog

Cava has seen a steep rise in its popularity around the world. Its sales have already exceeded the sales numbers recorded in the first three quarters of 2019. A whopping 170 million bottles were sold, which was 16.45% more than last year. More than two-thirds of these numbers are made up of exports. The most significant boost was witnessed in the American markets, with a growth of over 62.91%. Russia comes in second largest with 44.79%. Germany saw an 11.87% increase, Canada was up by 28.28%, and the Netherlands saw a growth of 22.32%

Cava is differentiated according to its sweetness and aging. The sweetness is divided across seven types: Brut Nature, Extra Brut, Brut, Extra Seco, Seco, Semi Seco, and Dulce. Here, Brut Nature is the driest with no added sugars, and Dulce is the sweetest with almost 7.5 teaspoons of sugar per bottle. Classification based on aging is primarily in three categories: Joven, Reserva, and Gran Reserva. Joven is a Cava that is aged anywhere between 9 to 15 months, Reserva is aged for a minimum of 15 months, and Gran Reserva is aged for at least 30 months.

Spain’s best-known sparkling wine also offers a wide range of sweetness and aging levels. Cava was first produced almost 200 years ago and exploded after the phylloxera outbreak impacting the French Champagne producing regions. Cava’s production begins in large stainless steel vats where freshly-squeezed grape juice is fermented once for sugars to convert into alcohol. This wine is then mixed and capped with bottle caps. Winemakers then add sugar and yeast depending on how long they plan to age the wine. This is where the second fermentation happens, and the bubbles are produced. The bubble-making process goes on for almost nine months. The yeast is then removed and more sugar is added. The wine is then corked and is ready to serve. Cava tastes best soon after corking and has ​​12.5–13.5% alcohol by volume.

Cava is popular for its unique taste that is refined through its sweetness and aging. Zesty lemon or lime, quince, almond, and tart apple are some of Cava’s dominant flavors. Secondary flavors of Cava include brioche, fig, and some minerality. Cava is also marginally cheaper, costing almost 1/3rd of a bottle of Champagne. This is also contributing to its rising popularity. At a lower price point, Cava offers a luxurious experience.

Cava is often equated or confused with Champagne and Prosecco. While the methodology of making Cava is similar to that of Champagne, Champagnes are made exclusively in the French Region of Champagne. Anything made outside is not Champagne by law. Prosecco is made in Italy and its second fermentation happens in large tanks. The regional and process-based difference completely transforms the flavor profile of a Cava from the Catalonian regions. Cavas de Guarda Superior de Paraje Calificado, aka the qualified location of Cava, plays a huge role in its impact around the globe. Josep Maria Pujol-Busquets, president of Alta Alella, explains, "With the Cavas de Guarda Superior de Paraje Calificado, the D.O. The Cava team has managed to introduce a magical element into the world of Cava that allows differentiated expression, with the Paraje Calificado."

Cost-effective, premium, light on your palate and your pocket, and refreshing experience — what more reasons does one need? Add Cava to your 2022 to drink list today!